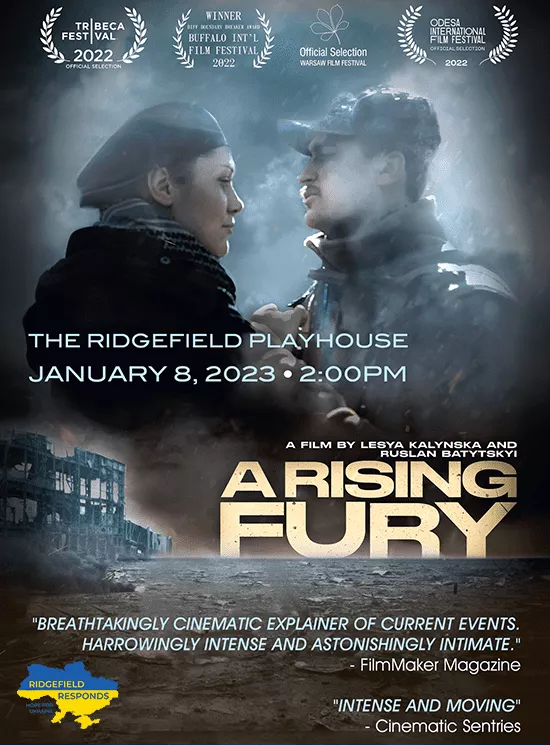 Ridgefield Responds: Hope for Ukraine presents a film screening event of “A RISING FURY“.  A Q&A with the brave filmmakers and a panel of prominent Ukraine experts will follow the screening of this powerful documentary film.  The event will conclude with a Taste of Ukraine Reception and an opportunity to meet some of the panelists in person.

All proceeds will go to provide humanitarian aid – housing and shelter in Ukraine for some of the millions of families displaced by the brutal war in their country.

A Rising Fury, premiered at the Tribeca Film Festival 2022 and tracks the evolution of the conflict in Ukraine. Filmed over 8 years, it follows two hopeful Ukrainian idealists from the peaceful protest of the 2013 Maidan Revolution in Kyiv to the full-scale Russian invasion of Ukraine in February 2022.

Pavlo and Svitlana met and fell in love at the Maidan Revolution. When Russia invaded Crimea and Donbas in 2014, Pavlo lost his family home and joined the Ukrainian military effort.   To defend his nation, he finds himself in deadly firefights against former friends who have joined Russian forces.  As Svitlana transports food and medical supplies, both find themselves on the battle lines, protecting their land, democracy, and their relationship.

Set against these personal stories, “A Rising Fury details the extent to which Russia has been playing the long game in preparing for its attempted takeover of Ukraine and the human toll that process has taken”.  – Nick Holdsworth, Modern Times Review

Enjoy sampling Ukrainian food and drink. Meet the filmmakers and some of the panelists in person.